1966: Veteran’s Day – Samuel R. LaRosa dedicates a formal Granite & Bronze Memorial at the entrance of the club. Reputedly the first to the Vietnam Veteran in the United States, it predates the National Wall in Washington D.C.  by 16 years. Starting with this commemoration, a 50 year tradition of ceremonies held each Veterans and Memorial Day begins.

1968-1969: On January 24, 1968, Gregory F. Popowitz becomes the Boys Club’s sixth casualty followed by five more through March 7, 1969: Curtis T. Gay, Thomas J. Sweeney, Louis H. Huff II, John A. Germek, and Lee D. Thomas. In all, 11 would make the ultimate sacrifice; more than in any one of the 1100 Boys & Girls Clubs nationally and presumably more than any other type of club or American fraternal organization on a pro rata basis.

1995: The La Rosa Club celebrates its 50th Anniversary with a banquet.

1998: On July 25, three generations of LaRosa Club members (Walt Yager, LaRosa Board; Tom Maglicco, Club Program Director; and Sean Yager, Club member) visit the National Wall in Washington D.C. to remove etchings of the names of their 11 Club members inscribed there on.

1999: On Veterans Day, Mr. LaRosa is presented with a Wall Mounting containing etchings of the 11 club names from the National Wall.

2000: Club member Sean Yager assists in both the erecting and taking down the “Moving Wall” at Norwin Park, Irwin, PA.

2004: Sean Yager fulfills his senior year community service graduation project at Norwin High School with a ten page thesis complete with a 70+ photo slide show which favorably compares Mr. LaRosa’s tribute to the National Memorial as conceived by Jan Scruggs. It will become the Historical Foundation to support the LaRosa Memorial as the first Vietnam Veteran in our nation’s history. Sean’s Presentation Outline can be viewed in its entirety at the bottom of this page.

2005: The LaRosa Club celebrates its 60th Anniversary with a banquet.

2013: Walt Yager travels to Gettysburg on Nov. 19th, the 150th Anniversary of Lincoln’s Address. He arranges for a photo shoot with Ken Burns, PBS Television’s National Documentarian, to include Yager’s 100+ year old, family owned, 48-star American Heirloom Flag. Lager’s purpose is to also inform Mr. Burns about LaRosa’s Historical Vietnam Legacy. Mr. Burns is scheduled to do a future documentary about the Vietnam Conflict (a similar one on WWll was featured on PBS). Yager also gives a copy of Sean Yager’s thesis to Mr. Burn’s Aide.

2015: As a tribute to the 50th Anniversary of the Vietnam conflict and to his club peers, Walt Yager, LaRosa Veteran’s Affairs Chair, dedicates himself to the project in memory of his mentor, “Sammy” LaRosa (1913-2003) and his son Sean (1985-2009). Yager dedicates himself, as well as the LaRosa Club, to the yet-to-be-finished recommendations outlined by his son for the historical preservation and education of the LaRosa Vietnam Legacy and the formal recognition of its Vietnam Veterans memorial as our nation’s first.

2016: November 11, Veteran’s Day will mark the 50th Anniversary of Sam LaRosa’s tribute to his 11 members who made the ultimate sacrifice in Vietnam, a most unpopular conflict. At the 2014 Veteran’s Day Ceremonies, the LaRosa board and administration, together with city officials, proclaimed their commitment to bring extra special honor and attention to this historic event. A prototype for this is the suggestions made by Sean Yager in his appendix to his 2004 community service project.

September 2016: Walt Yager his wife Lavonne spend one week to research and travel to sites claiming to have the nation’s first memorials to Vietnam Veterans war dead. Photos are taken. They come away with the opinion that LaRosa in the most traditional sense is still arguably our nation’s first. 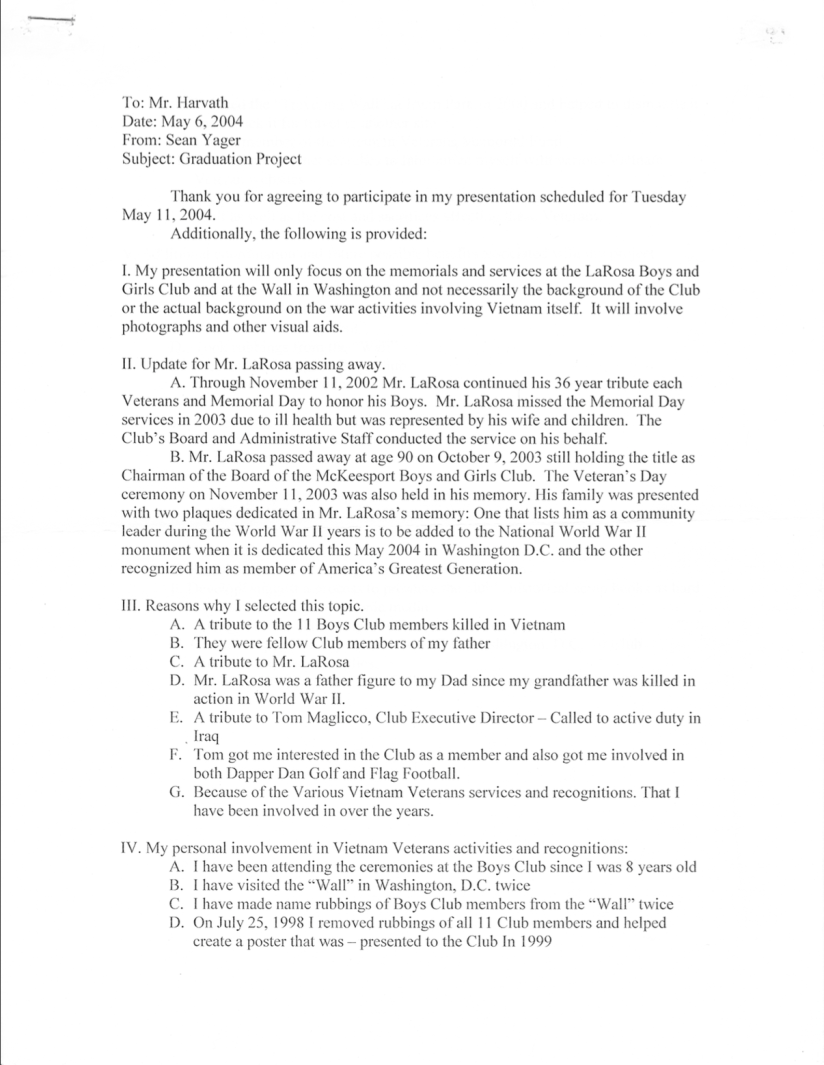